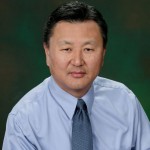 Having worked as Reporter at Korea Times New York, he has great writing style and provides very accurate translation. He has also accumulated considerable experience in interpreting as well.

When I work for Korea Times newspaper as a reporter, I translated

English articles into Korean for Korean Community in U.S.

5. Interpretation at the booth in the convention center

1. Interpretation at the meeting between importer(Korean Company)

ex: Hotel Pick Up–Travel to the company in U.S. (by car or air)

–Have meeting at the company

equipments and training on how to install, maintain, and use.

Job Description: Responsible for the communication between the

AMD, HP and many other prestigious semi-conductor

Arrange the meeting between the two when they

come to visit the company in Korea.

arrangement and interpretation at the meeting.

Entertainment after meeting such as dinner and